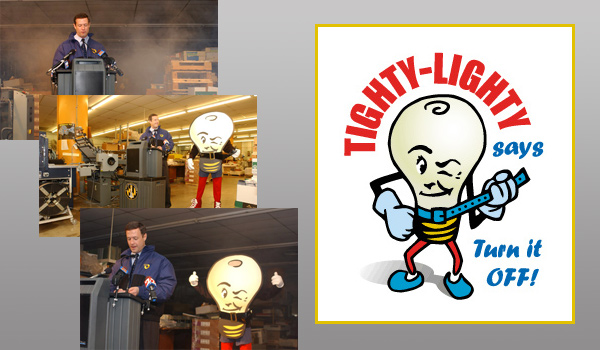 The City of Baltimore was distinguished for its energy saving campaign in local government buildings and courthouses. Posters were displayed prominently in lobbies and near elevators, and e-mail campaigns were shared with all employees.

Enter Tighty Lighty, a cartoon light bulb and energy-saving superhero that was rolled out in 2002 to encourage Baltimore City employees to be more energy-efficient. This superhero isn’t signaled by a spotlight in the sky (that wouldn’t be energy-efficient). Instead, he arrives in city employees’ e-mail inboxes, bouncing around and winking as he tightens his belt and reminds them to “turn it off” – part of a energy conservation project that public works officials say will save millions over the next several years.

The savings since 2001 – when energy conservation became a priority – is about $1 million, with much more expected annually as a result of money-saving technology upgrades.

Careful control of energy use is saving money, Baltimore Sun

What can we do for you?

Drop us a line, and we'll respond to any request, no matter how large or small. Contact us today

PFAD is a locally owned and operated collective of designers and web developers ready to add value to any project. Your organization can benefit from individual attention while leveraging a complete team of experts.